Entheogen- “The Creation of God within”

Visionary plant medicine is a term that describes the group of entheogenic “teacher” plants used in traditional societies throughout the world to promote wellbeing and healing at individual and community levels. This group includes ayahuasca, huachuma, iboga, peyote, San Pedro and psychedelic mushrooms. Other safe psychoactive flowers, plants and substances, many containing DMT compounds and lysergic alkaloids are also used in many sacred ceremonies.

Translated as the Vine of the Dead, Ayahuasca shows us what it is like to die.  In fact the psychoactive property of Ayahuasca, DMT, is naturally released into the brain when we are born and when we die.  While death in the West is treated with great fear, in Shamanism it is the focus of our life’s mission. Death is the grand finale of life and we must be prepared for this final moment of triumph.  It is perfectly natural to be afraid of dying, which is precisely why we must practice the dying process in order to be better prepared for the final moment. In this final moment the full power of our spirit is released, an overwhelming surge of energy is felt and our brain, which we usually use a small part of, is greatly expanded.  This process can be overwhelming and intimidating, but with practice it becomes enlightening.  It is imperative to practice the dying process while we are alive in order to meet our end with calmness and focus for it is in these final moments that the answers of the universe are revealed.
Aya is available in the US when given conducted in indigenous ceremonial usage with someone who has become a member of a religious organization linked to traditional medicinal plants. 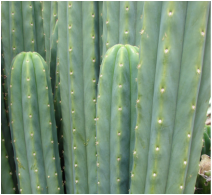 Where Ayahuasca teaches us how to die, Washuma teaches us how to live.  Washuma is a cactus that lives in the Andes of South America.  With great reverence we will prepare our own Washuma medicine for ceremony.  Washuma gives us a glimpse of no mind, and with practice, even Samadhi or enlightenment. Our “chattering monkey mind” momentarily quiets, allowing us to reach great depths of introspection, even allowing us to leave our body and travel into the astral realms.

San Pedro is available in the US as a decorative succulent. Its usage is also tied to native traditions.

Psilocybin is a naturally occurring psychedelic prodrug compound produced by more than 200 species of mushrooms, collectively known as psilocybin mushrooms. As a prodrug, psilocybin is quickly converted by the body to psilocin, which has mind-altering effects similar, in some aspects, to those of LSD, mescaline, and DMT. In general, the effects include euphoria, visual and mental activity, changes in perception, a distorted sense of time, and spiritual experiences, and can include possible adverse reactions such as nausea and panic attacks.

Under the influence of mushrooms, overall brain activity drops, particularly in certain regions that are densely connected to sensory areas of the brain. When functioning normally, these connective “hubs” appear to help constrain the way we see, hear and experience the world, grounding us in reality. They are also the key nodes of a brain network linked to self-consciousness and depression. Psilocybin cuts activity in these nodes and severs their connection to other brain areas, allowing the senses to run free.

Hunter gatherers, who lived in what is today known as South Africa, used the plant for well over 1000 years. It was mainly used to calm fear and depression of warriors returning from battle; today known as Post Dramatic Stress Disorder. The use of a plant named Channa or Kanna has been documented over 225 years ago, reporting that the Hottentots used it as a vision inducing drug. The root was chewed and caused their animal spirits to awake, made their eyes gleam and their faces display joy and laughter. Even the simpliest circumstances would make them giggle and their brains were full of enjoyable ideas.

Barely known by Westerners in the past, it is now becoming an alternative treatment. Today, with the problems of depression and anxiety in Western society, the demand for Sceletium tortuosum as a safe and effective natural medicine is reaching new heights.

There are about 1,000 species of Mesembryanthemum found in the dry parts of South Africa, with about two dozen varieties, including the two described here, believed to be members of a separate genus, Sceletium. All of them belong to the family of carpetweed, Aizoaceae and are considered relatives of the pokeweed, pink, and cactus families. 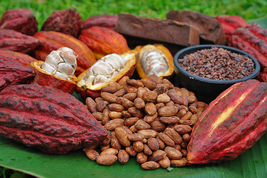 An Indigenous myth tells us whenever the balance between humans and nature becomes threatened, cacao comes from the rainforest to open people’s hearts and return the planet to a state of harmony. Sacred Cacao was bypassed in the ‘60’s resurgence of medicine-plants because it does not act like a psychedelic – it does not take you on its trip, but facilitates your own.

A ceremony with cacao can is an experience in multidimensional group energy… Cacao works with you where you are, and with the ceremonial facilitator through where they are.  Cacao brings the door but doesn’t push you through it.

A major advantage of ceremonial cacao is that it makes it much easier to deeply access ones emotional body, pain body, or density on the dark shadow side… or ready expansion and higher dimensional connection on the light shadow side.  Cacao allows you to go considerably deeper into meditation and self-healing than possible without the medicine… and understandings tend toward more permanent changes.  Cacao can be heart-centered anchor… The propriety entheogenic blends can be  very powerful medicine…

The plant’s seeds are especially noteworthy because they have seen continual use for thousands of years in the rites of many cultures. The plant has remained a popular tool in both folk medicine and spiritual practices for so long that some historians believe the plant may be the ancient “soma”.

Harmala alkaloids act to inhibit the MAO enzymes and facilitate the absorption of DMT and other tryptamines. However, it also causes the absorption of tyramine, which is found in many foods, to go unregulated. For this reason it is very important to watch your diet when taking anything that is an MAOI.

As Syrian rue is an MAOI, it is very commonly used to potentiate other psychedelic plants, enhancing them and prolonging the high. A good example of this is the use of psilocybin or DMT, where the prior use of Syrian rue is reported to lengthen the experience by up to 4 hours. Syrian rue can also be used as a psychedelic itself with larger dose but this can cause a lot of physical discomfort. Harmala and harmaline, alkaloids of the rue, can result in a range of psychoactive effects on their own.

Syrian Rue, is legally available in the US. 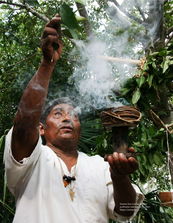 It is highly recommended that those new to Master Plants begin their journey into the Shamanic world with a Tobacco ceremony.  In a Tobacco ceremony, participants drink a highly condensed, liquified tobacco and then immediately drink at least 7 liters of Malba Tea.  An immediate purging will begin which will help cleanse the body/mind/spririt. This Tobacco purge will make all other plant ceremonies more harmonious and powerful.

Jungle Tobacco (Mapacho) is used throughout Shamanic ceremonies.  Before (and during) many ceremonies, tobacco ash (Rapé) is often applied to participants by blowing it up their noses.  The immediate affect is to clear the 6th and 7th chakras both physically (it is common to release a lot of mucus) and spiritually by opening the energy channels for heightened vision of the invisible realm. During the ceremony, Tobacco smoke is used both to cleanse the energetic body and to seal in the lessons we’ve learned in a ritual called a Soplado. Smoke can also be used if a participant’s energy is becoming scattered or panicked, as it tends to calm and focus ones energy.

In recent years, various studies suggested that ibogaine, a hallucinogenic indole alkaloidisolated from Iboga plant, has major potential in addiction therapy (opiate, alcohol, tobacco) as well in psychotherapy. Today, the use of ibogaine treatment is acknowledged as an effective alternative approach in drug addiction therapy.

The major advantage of ibogaine in addiction treatment is it’s lack of addictive effects. It reduces the symptoms of withdrawal, and allows a painless detoxification to some extent. In many cases of hardcore cocaine or meth addiction, the subject has stopped after one session of iboga.

It is not readily available on any viable scale here in the US and is usually administered in South Africa or Coasta Rica.

Lysergic acid amide (also known as LSA, d-lysergic acid amide, d-lysergamide, and Ergine) is a naturally-occurring psychedelic alkaloid of the lysergamide chemical class that produces psychedelic effects vaguely similar to those of LSD, albeit qualitatively distinct, when administered. It is structurally related to LSD and is thought to be the primary active compound within many plant products such as morning glory seeds, Hawaiian baby woodrose seeds and some species of fungi. LSA was assayed for human activity by Albert Hofmann in self-trials in 1947, well before it was known to be a natural compound. Intramuscular administration of a 500 microgram dose led to a “tired, dreamy state with an inability to maintain clear thoughts.”

Lysergic acid diethylamide (LSD-25, LSD) is an iconic semi-synthetic psychedelic substance of the lysergamide chemical class that produces what are now considered to be “classical psychedelic” effects (i.e. those associated with mescaline, psilocybin mushrooms, LSD, and DMT) when administered.

Among other things, LSD has been noted for its elusiveness, impact on various youth subcultures and alternative spiritualities, the arbitrariness of the soft prohibition on its research, as well as the relative difficulty of producing it in a clandestine context. It is considered by some to be an example of the world’s first modern entheogen, a category which had until that point been limited only to traditional plant preparations.

Unlike most highly prohibited substances, LSD is not considered addictive or toxic by the scientific community. The effects LSD is often used as a baseline for other psychedelics journeys. The effects are generally similar to psilocybin or ayahuasca.

Peyote is a psychoactive alkaloid that comes from a small cactus that grows wildly in the Chihuahuan Desert. The cactus can be found in areas of Texas and Mexico and is common among scrub where there is limestone settlement. This plant, particularly the mescaline within the plant, can produce a wide range of effects including deep insight into one’s spiritual side. Auditory and visual hallucinations are also common with the use of Peyote.

Peyote can be harsh and widely unpredictable and is really experienced practitioners.